A couple of weeks a

go, I had the opportunity to travel to San Francisco for work. Despite the fact that the weather was awfully wet (what a West Coast thing to do, complaining about the rain!), I loved being there. It was like a big version of Vancouver. Well, maybe not quite. But it had all the things I love about Vancouver on a bigger scale: beaches, restaurants, interesting buildings, Chinatown, ….

I had a list of things I really wanted to do including eating out Thai, sushi and vegetarian, do some yoga, take a photo at the Golden Gate Bridge and get to the Pacific. I am proud to say I covered them all.

In the week I was there I walked a lot, so much in fact, that on Saturday I was happy to fly home because it meant sitting down for an extended period of time… Which speaks volumes about how I like to experience new places. I get myself a map and start walking. The day we arrived, I checked into the hotel and left again shortly after to look around, get a feel for the city and find some food. I returned about three hours later after taking tons of pictures in Chinatown, since it was all decorated for Chinese New Year. I had also walked all the way to Fisherman’s Wharf (I couldn’t take the cable car since I had no change on me) and back past most of the piers. My food exploits were a Starbucks latte and a muffin… not because there weren’t enough places to eat. I was too excited to be there and did not want to sit down. Well, plus I just got off the plane after an 11 1/2 hour flight.

Over the next few days I had Mexican, Lebanese, Sushi and Thai food plus yummy veggie sandwiches at this little coffee shop just down the road, where the coffee also happened to be very good. I also checked out a yoga studio. It was okay. I went back mainly because the schedule worked for me…

On my free day, the rain was pouring down. It felt like an average winter day in Vancouver. Did I mention that in the weather forecast a couple of weeks before I was „promised“ sunshine and a breezy 15 degrees Celsius…?

I hopped on the public bus and went all the way down to the Pacific. By the time I got there, the rain had eased off a bit. The sky was grey, t

he clouds were low and it was really windy. I did manage to take some pictures of some crazy surfer dudes that didn’t let the weather get in the way of their favorite activity.

I am still hoping to drive up the coast one day, all the way to Vancouver.

I am not sure how many pictures I have taken over the years of the waves crashing, drift wood, seagulls, low clouds and sunsets. I love this part of the world… 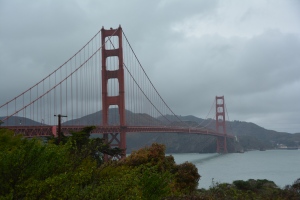